Books for breakfast, & then some

The menu this week, so far 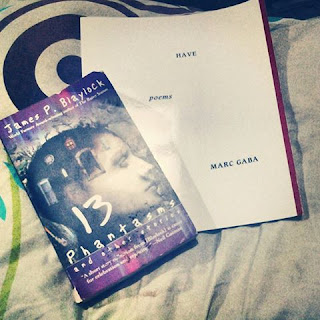 Have, by Marc Gaba
13 Phantasms and other stories, by James P. Blaylock

Traffic has become even more terrible since classes started last June. I'm seriously considering taking the train everyday so that I don't have to beat the clock each morning. (Currently, I take the train only on Wednesdays and Thursdays.)

This means waking up before five a.m., though, and from past experience, this leaves me more stressed, not to mention quite useless to my husband and daughter when I crawl home in the evening. It also means I will have to take two jeepneys, in addition to the train, and will need to leave expensive office-related gadgets (like the tablet pc) at home. Getting on the train quickly in the mornings also means I won't bring a bag to work--bag-carriers need to fall in line and have their bags inspected, and this alone can take an additional 10 minutes.

But. Getting on the train also means I have more time to read books, which I've been doing, quite happily, these last two weeks.

Tired from last week's fantasy and steampunk overload, I felt like reading Marc Gaba's "Have", which includes poems from his previous chapbooks, "How Sound Becomes a Name" and "Noveau Bored". Reading the poems together, and with other poems in "Have", makes certain themes in Gaba's previous works more apparent, and this allows the reader to find more joy in the work.

Or: maybe I've just turned older; have read more of his work over the years; have read more work by other contemporary poets to make conjectures about the context and conversations in which these poems are taking place. As with other work that puzzles at first read, one is simultaneously repelled and attracted by the sheer power of words taken out of the usual contexts, sounding so different as when used in the usual conversations.

But last Monday, it was this sheer power, this (pure? almost-pure? can anything ever be, really, pure?) beauty of language that I wanted as company--the world I wanted to wrap around myself like a cocoon wraps around a caterpillar. Where shelter is a kind of escape--from the petty and the everyday and the things I don't like, like traffic and pollution and the sweat and grime of the city, inconveniences, thoughts I don't like to have, loneliness.

In "Have", words appear, one after the other, but each--because of their typographical placement, what appear as bar lines in sheets of music (which is yet another way to read the poem, to read the words within two bar lines to the beat of a particular time signature you'd designate for that kind of poem), the line breaks, the page breaks, the shifting grammar--each appears as itself, as though each were not simply part of a whole sentence in order that sense might be made, but as an atom that itself generates power, strangeness, beauty.

All that takes so much from this reader, though, and so I found myself choosing Blaylock's urban fantasies to take with me on my next trips on the train. Blaylock is pretty successful at building worlds and ambience--which makes for a pretty effective escape from the immediate world during train rides.


Posted by tintautology at 8:30 AM