The Natividad Galang Fajardo room was filled to the rafters, so to speak, yesterday afternoon for the first Taludturan sa Tag-araw poetry reading by Ateneo alumni who (continue to) write poetry. Thank you, Boyet del Prado, for inviting us to the event. Maraming salamat, Kagawaran ng Filipino, for organizing the event.

By and large, it brought back the 1990s poetry scene at the school. What was that like? Back then, the school offered no course on Creative Writing. So if you were interested in literature, you took up Filipino (as did GF) or English literature (TF) or IS (CP) or Comm (JC and RV) or Philosophy (me) or a business course  (TS), or a science course (MM, in the beginning and KD, at one point)-- pretty much anything. It seemed like a level playing field, with none of us thinking we were imbued by our course with any special knowledge or advantage (to begin with, none of us looked upon writing as a competitive field; it was something we enjoyed enjoying together). If  you were really interested, you joined Heights, the college literary magazine--and then you got some rudimentary idea of literary criticism, simply by observing what the elders in your staff did or said. (It was maddening though: Some of us would ask, but what makes a poem good? No one gave any hard and fast answers. You had to figure out your own poetics as you went along, observing how the others explained theirs.) So even that--membership in Heights, that first exposure to literary criticism of a sort--didn't make one's love or prowess any greater than any other student's.

Back then, I was involved with what used to be called, "socially oriented organizations", and in these orgs, there was a great love for poetry too, with members (like myself) joining the Heights Filipino staff and the culture in those orgs crossing over to said staff. There was no monopoly on poetry readings and other such activity, not even on the publication of poems--some of which were published by Matanglawin (the college's Filipino-language magazine). None of that mattered. The scene seemed quite permeable, encouraging, rather than discouraging, particularly (now that I look back) the quiet and shy. But it was also a scene that tended to look inward, toward the community that nurtured it, and toward the 'self', both in terms of content and practice.

That is how I, at least, remember it to be.

*
So there we all were: The  teacher who taught the only creative writing course I'd attended in college-- a summer seminar 20 years ago--Rofel Brion, who read three poems from his newest book of poetry (May Nagsabi sa Akin); Beni Santos, whose works inspired me back in the day, mused half-jokingly about Ateneo poetry being all about "hawak-kamay" and "ulan" and "diwata", in addition to reading three of her recently published/written poems; Boyet del Prado (whose poem, "Pusa" had recruited me into Heights), reading his translation of a poem in English written by Cathy Babao Guballa (as well as Cathy herself, reading the original version); Club Dredd princess Karen Kunawicz, who read (with feelings!) one of the two or three poems that made the audience laugh (and in her case, laugh out really loud: i.e., "You are the lava in my lamp."); Imo Quibilan (former editor-in-chief of Heights, now based in the US--it was he who interviewed and accepted me into Heights 22 years ago), whose work was read by Mitch Cerda (who delivered Imo's crowd pleaser); Emman Velasco (cheered on by his former org-mates from Gabay, the scholars' organization), who read three poems from his new book, "Dalawang Pulgada at Tubig", which made all of the audience sigh and sigh and sigh (and, if they were of a certain age, yearn and yearn and yearn for the poetry of their youth)--the poems were so pure and innocent and perfect; and the legendary Jim Agustin, now based in South Africa, reading poem after poem after poem (in English and Filipino) from his two new books: Baha-bahagdang Karupukan (beautiful title!) and Alien to Any Skin. There was award-winning author and former classmate, Bong Oris. And then there was me, who had looked up to, and had tried to learn as much as I could, from all these writers. 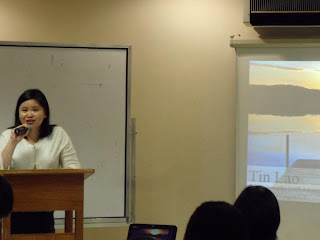 "Ang kaunti lang natin noon," Beni Santos recalled. "Ngayon, ang dami na."
For there, too, were the generations of writers that came after, represented at the reading by: AILAP's Dr. Egay Samar (who read a poem about, well what do you know,"hawak-kamay"--it was a pleasure to hear him read); Filipino Department's Dr. Jason Jacobo (I loved that the poem he read had Bikolano words! That I understood!); Alyza Taguilaso, whose  "Examination" (and the reading thereof) made appreciative eyes (including Karen Kunawicz') follow her as she made her way back to her seat; and the youngest reader of the afternoon, Ma. Amparo Warren, who will soon be en route to Bacolod for the 12th Iyas National Writers' Workshop.
In the audience were friends and acquaintances from way back, including fictionists Cyan Abad and Christine Bellen; poets Jean Page Tan (another editor-in-chief of Heights); Argee Guevarra; Irwin Cruz; Nikko Vitug; Eva Gubat; Gary Devilles (who was punong abala for the event); singer-songwriter Dawn Bande; Elsa Manansala and Ruby Mamaradlo-Evangelista--both classmates of the hubby; the hubby (who arrived just as I was about to read my work); and the little one. And there were the students enrolled in the school's Summer 2012 Filipino classes. My understanding was they'd been required to attend the reading. But it seemed like they enjoyed it.
*
It wasn't so much nostalgia, as much as it was the sense that something was being made present which I/we once had thought was past: How we used to appreciate poetry back in the day (something, I gather from my brief conversations at the gathering, most of us--writers or no-- are unable to do as often as we had done, once, or as often as we would like today). "Parang bumalik tayong lahat sa college," Dawn and Elsa said, and I felt myself agreeing with all my heart. They even looked the same (I've fattened up.).
As it turns out, we all miss it--the poetry we grew up with--even I, who'd spent many years running away from the school's "voice", which some of us problematized (i.e., theorized about; i.e., fretted about--yes, we did this work some time in the early 1990s): the tulang tahimik, the poem that is sigh--silence--sigh. (Perhaps the (perceived?) homogeneity in poetic tone back then was due to the smaller number of people writing, or attempting to write poetry within the community. The school was not so big back then--a single college, where now there are four schools.)
But this isn't about that at all. To me, it's not that the "voice" of a certain era that yesterday became present once more (there was a variety of poems; the younger poets made sure of that, and even the elders among us delivered poems different in tone and texture from the ideal of the tulang tahimik); Instead, what I found interesting was the feedback that there was something different about this reading: "It's much more chill," a young member of the audience said. Less slam, less obviously performance (though standing awkwardly before a mike and reading in a manner that seeks to emulate the contact between page and reader without an external voice mediating/interfering-- is performance too), a lot of people reading quietly to each other--the way my roommates at last year's workshop would read to each other their latest efforts, furtively, but with so much manic glee.
It's not the only way of enjoying poetry today (and I wouldn't even go so far as to say it's a better way of enjoying poetry; it's just a different way of doing things)--but I realized yesterday that the old quiet way, this intimate way, the recital or reading of poetry with sincerity, now seems new again.

*
Or maybe it's just me and Dawn and Elsa (both of whom I met, not in Heights; Dawn was my editor at Matanglawin, Elsa, the president of Gabay. We met each other quite often, as we were all members of clubs that formed KADIPA--Kaisa sa Diwa at Pananampalataya--an alliance of socially oriented groups at the college) being happy at the discovery that the love for poetry that nurtured friendships back then, remains, flourishes, in spite of the distances between us, in spite of the passage of time, the sadness and disillusionment that comes after youth, after theory, after irony. That the people who came immediately before us, who had helped nurture a love for poetry--Jim and Emman, for example, are writing, still writing, and still writing beautifully.  The writing and love hinting at the survival of something innocent? pure? eternal? inside us, despite everything.


Posted by tintautology at 1:55 AM

Email ThisBlogThis!Share to TwitterShare to FacebookShare to Pinterest
Labels: accountabilityreport