It's been so busy these past few weeks I haven't really been able to stop and (re)collect myself. And now the little one is down with a bad bug--this keeps me home now; how ironic, then, that it is this sad event that gives me the time excuse to track what's been happening.

(Thank you, everyone, for tagging me on all these photos. Without you, this post would not exist.) 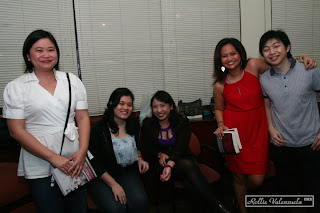 Firstly, the launch of Angela Stuart Santiago's Revolutionary Routes on 20 August, at the Filipinas Heritage Library, a happy meet-up with Hell Kitten  (purple shirt) and friends and giancantdance (gray shirt). Author's daughter, Ina, who took care of publishing the book,  is the lady in vermilion. (Photo by Rollie Valenzuela, and grabbed from Facebook.)  It was a very intimate affair (you could tell it was also a reunion of close family members) with lots of interesting people, and really good food. Review of the awesome book here. 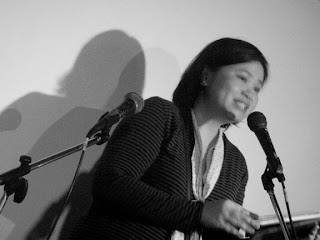 Secondly, the launch of Joel T. Toledo's Ruins and Reconstructions on the last 22 August, at Mag:net Katipunan. Joel had requested I read his poem, Asian; I also read my translation of a new poem of his (not in the book), Molting, which Sir Rio Alma said he enjoyed. (Photo by J. P. Salud; grabbed from Facebook.)

Thirdly, the 2 September launch of Under the Storm: An Anthology of Contemporary Filipino Poetry, an excuse to meet up with Jordan (see photo below: gray shirt), Lyza (peach jacket), Eva--all of us contributors--and meet other contributors like Tilde (Johnny-Depp-shades, from whom I bought awesome original comics). 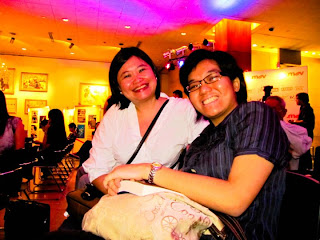 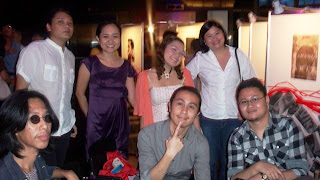 Jordan and I arrived quite early, and were met at the door by Ren, who was very helpful and welcoming. When people began filing in, I saw Doktora ekmisao (stripes), who showed me around the Ayala Museum's Japanese anime/manga exhibit. Lyza soon came after and the doctor and doctor-to-be, both Japanese art fans, bonded over the beautiful beautiful work shared by the Japan Foundation. Charles followed soon thereafter; Eva too. Later, Charles, Lyza, Jordan and I grabbed some dinner at M Cafe, where we met up with blissery and co. (i.e., Jaykie!)--who came straight from the office and her first-prize-poetry-Palanca win. The waiters, however, did not appear to know who she was, and her food did not materialize in a timely fashion. M Cafe made up for the delay with a free glass of iced tea. Tsk tsk.

I must say that Under the Storm-the-book is a thing of beauty. The paper on which the poems are printed is so lovely.

Fourthly, I spent the run up to my birthday treating my parents and brother out at Mann Hann in San Juan, capped by a trip to the Little Store on a Hill for some fresh lumpia. It was sort of a trip down memory lane, as we tried to recreate the menu of things we used to order when we were mostly based in Binondo a long, long time ago. My birthday itself was spent at the State U, taking an exam, and then later, at work, at my old high school--although my husband and daughter met me for dinner at Bizu in the evening. And even that later that evening, the husband surprises me with a short essay dedicating the entire Freddie Mercury discography to me--mostly about love that kills, haha--and ending with his undying constancy and loyalty. Naks. <3

Fifthly, the CCP and NCCA tribute and memorial for Dr. Edith L. Tiempo, who passed late last month. The memorial was held last Wednesday 7 September, at the CCP Little Theater. An account of the beautiful and elegant program here. Videos of the event, taken by Rayvi Sunico, have been uploaded on youtube. The series of video clips begin with the part where national artists offer flowers to Mom Edith.

Now for those who know me, you will likely laugh at me, in the following photo: 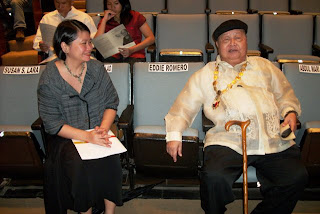 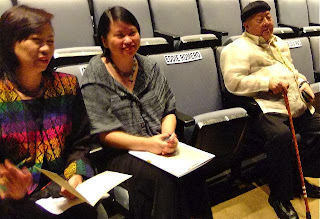 With Ms. Susan Lara, who gave a beautiful tribute, and who was responsible for the preceding photo. (This and next two photos by Krip Yuson.) 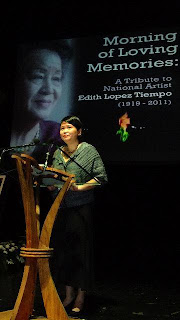 I was asked to read a very short poem Dr. Tiempo wrote just a few years ago, on Easter Sunday; the poem served as a Doxology and opened the program. 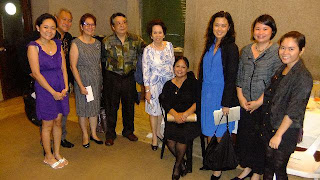 Always so nice to see Gino Dizon! (Thanks OJ Serquina!) 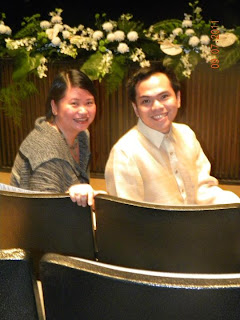 Nikko Vitug played a short piece that Mom Edith 'heard' during a dream, and which was being transcribed by DM Reyes. You can't tell from this lovely photo by OJ Serquina that Nikko and I were weeping a little throughout the program. :P

CCP's Ed Cabagnot played quite a role in making the program as lovely as it was. (And the food was great, too! <3)

After the program and light lunch, Miel and I headed off for some green tea latte. Yum. 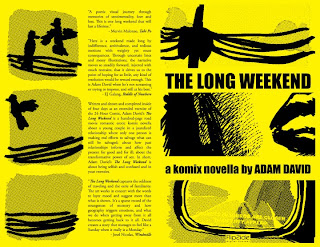 I had planned to head over to Carljoe's book launch/birthday celebration (also the launch of Adam's Piso Per Word project) at Sputnik Fantastik yesterday (I had wanted to get Josel Nicolas' Windmills and a print copy of Adam's The Long Weekend--but these, together with Carljoe's Geek Tragedies,  had sold out by the end of the evening), but this trip didn't pan out, as the daughter had become quite sick by then.

But I hear you can still download Carljoe's newest book for free at this link.

I hope the little one gets well soon.
Posted by tintautology at 6:57 PM